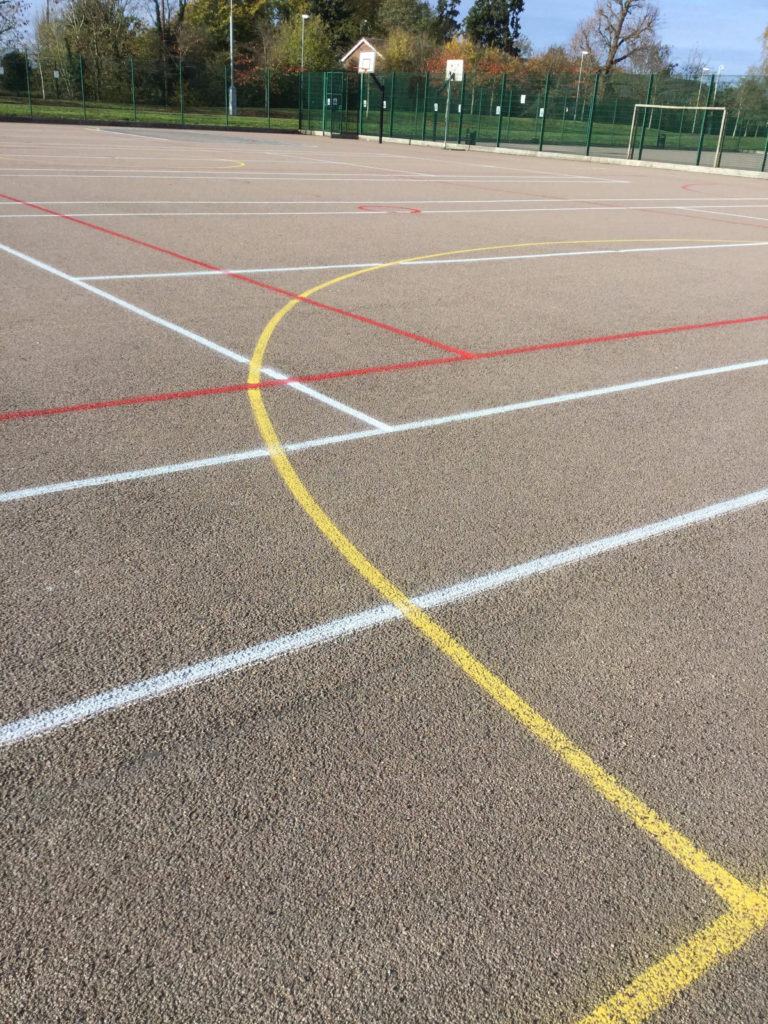 We were asked to smarten up the lines on the sports playing courts at St Mary’s School in Hertfordshire.

PGSD is always happy to help when it comes to marking sports surfaces, including running and athletics tracks and playing courts. This can include cleaning, marking and maintaining sports surfaces all of which makes it that much easier to decide who has won that all important point!

St Mary’s is an 11 – 19 co-educational, comprehensive school with Academy status and an admission number of 240 for each new Year 7 cohort. The school is one of four Church secondary schools in Hertfordshire within the Diocese of St Albans. The school is well recognised in the local community for its high quality provision and outstanding inclusion agenda. 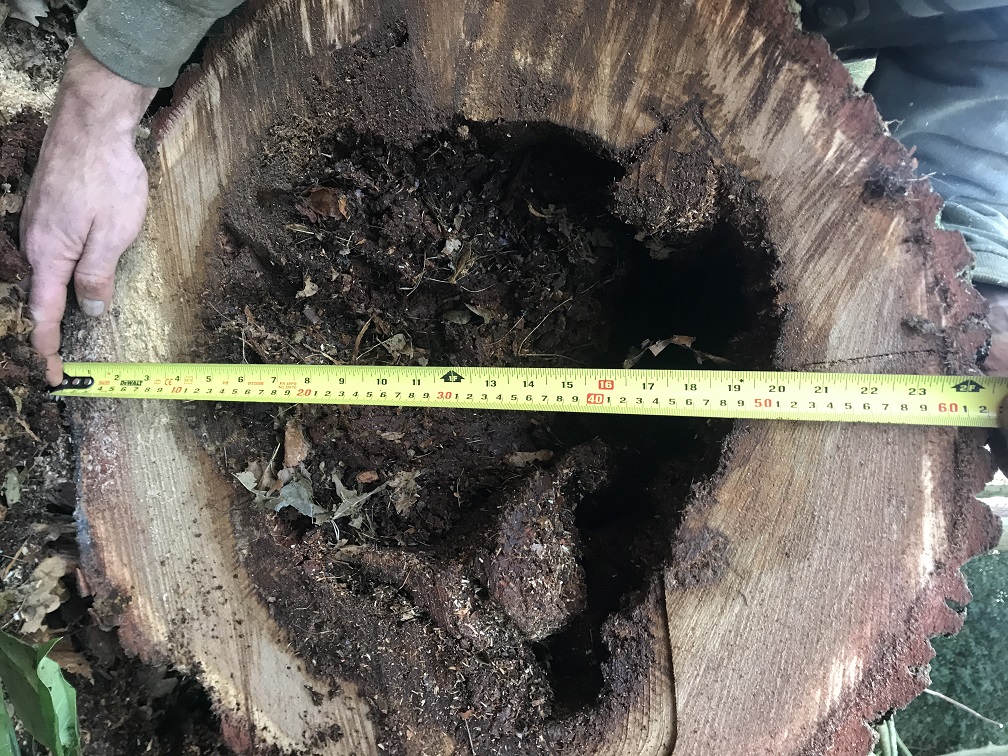 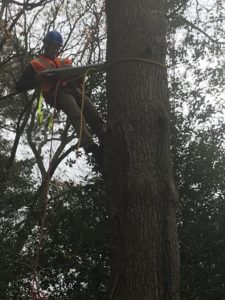 Johnson & Johnson had a semi mature oak on their grounds close to their only pedestrian access footpath to their site.

PGSD identified a suspect looking pair of cavities on the trunk of the oak. We recommended that a Resistograph was undertaken which would show, via the resistance of penetrating a special drill bit, if there were any cavities within the trunk. Having undertaken the Resistograph we recommended that the tree needed to be removed as a matter of urgency.

Having already undertaken a TPO check with the local authority, the PGSD tree team was deployed the following day to dismantle the oak tree and leave the wood stacked in habitat piles.

Once the tree had been dismantled, we were able to see the extent of decay present within trunk. The cavities and decay were on the sweet spot of the trunk. This is the worse place the decay could have been as this section is where the greatest amount of stress is placed on the tree.

The amount of decay present had a diameter of 40cm, the diameter of the tree was only 60cm, the linear length of decay was approximately 200cm. 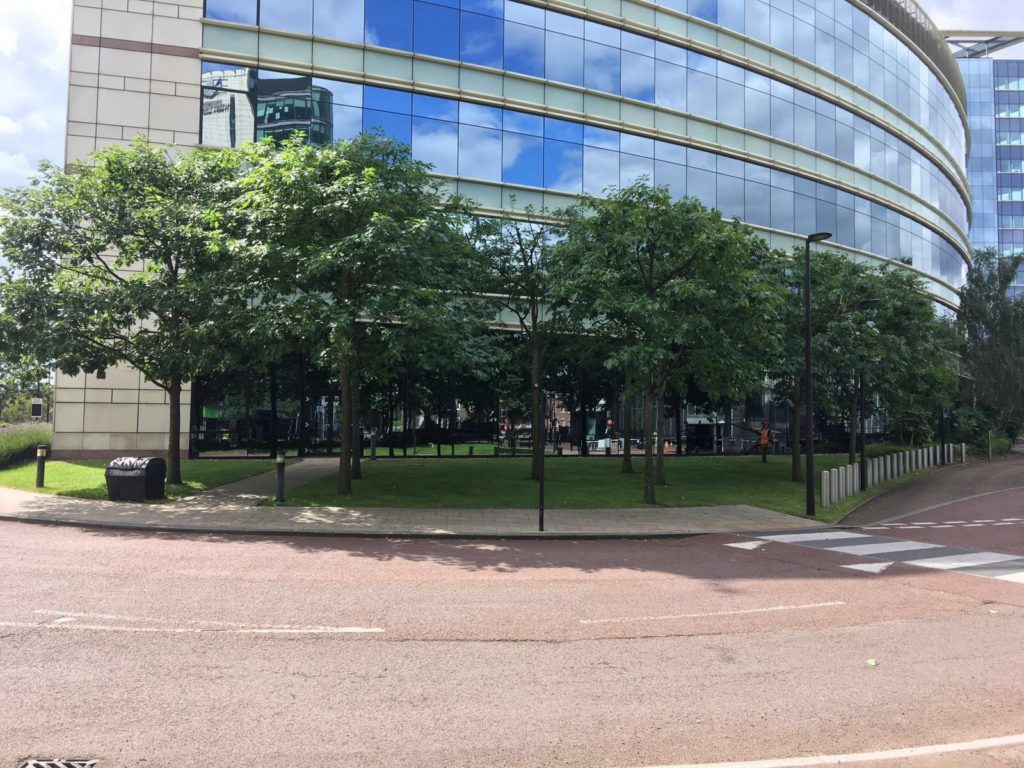 We were asked to attend the site by GlaxoSmithKline to reduce 13 small red oaks by twenty percent. The objective was to allow security cameras to see the main entrance. This was a tricky job as the branches we were pruning were very small, so getting out to the best growth point took patience and skill.

GlaxoSmithKline plc (GSK) is a British pharmaceutical company headquartered in Brentford, West London. The company was created in 2000 following a merger between Glaxo Wellcome and SmithKline Beecham. 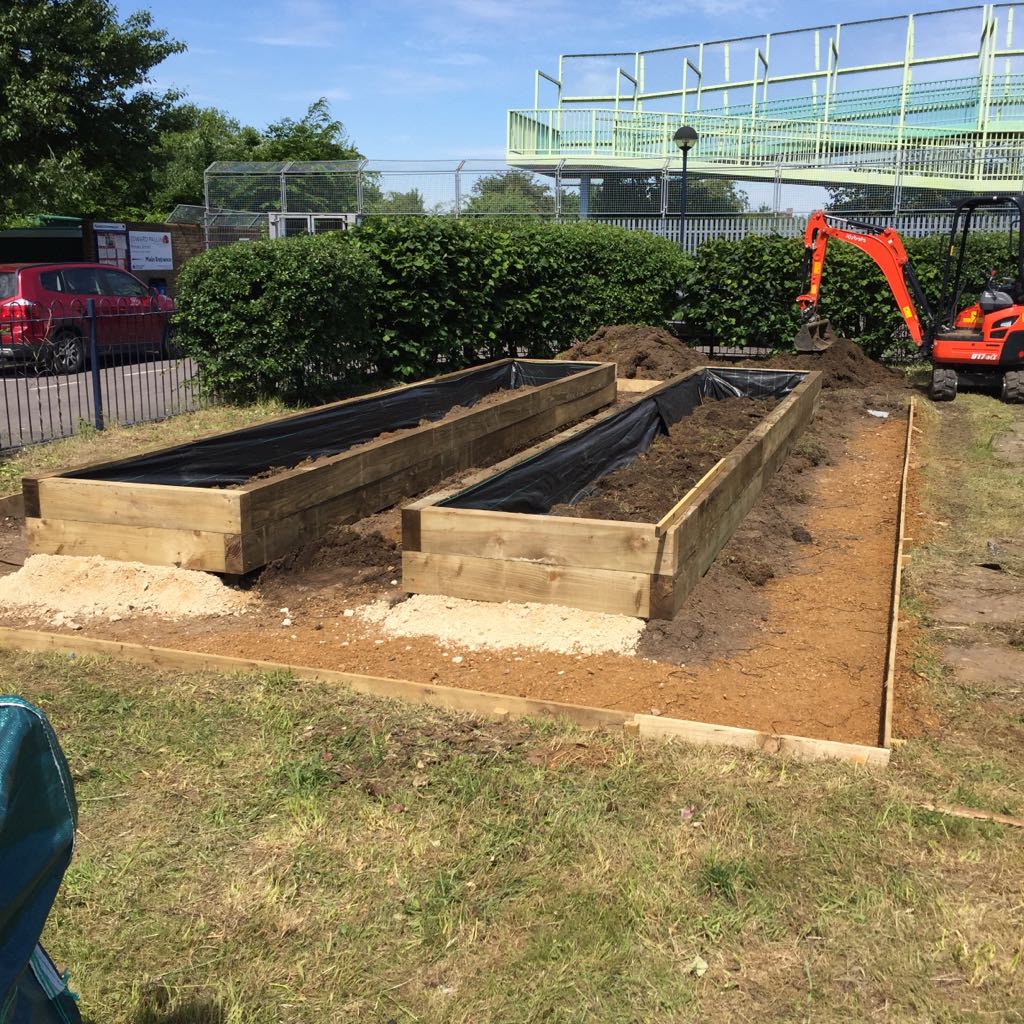 PGSD Limited was asked to help with a project at Edward Pauling Primary School in Feltham, in the London Borough of Hounslow. The School is a two-form entry school for boys and girls between the ages of three and eleven.

The photographs show the raised sleeper beds and pond (work in progress). 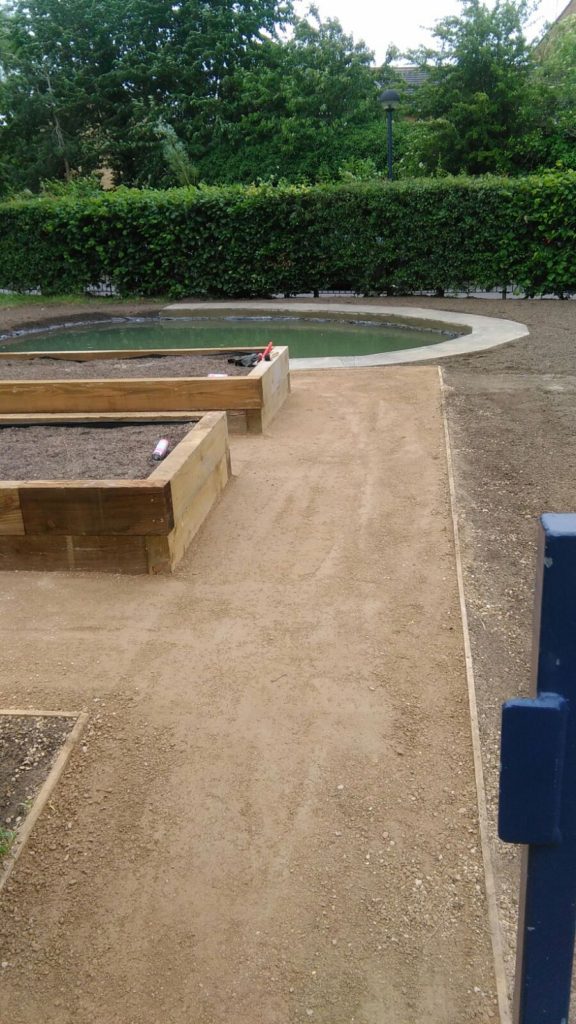 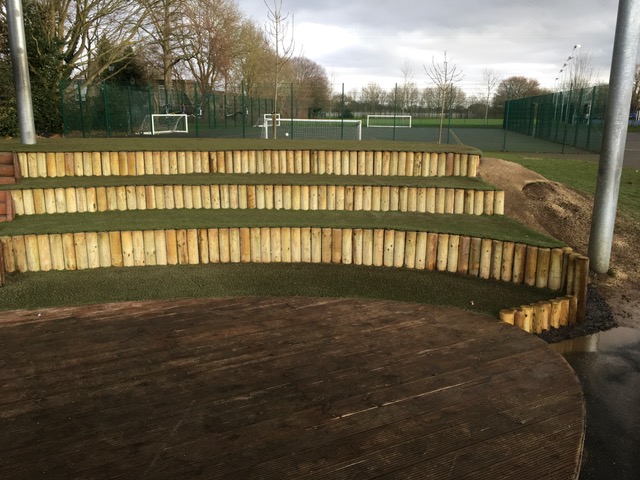 PGSD Limited was asked to help to revitalise an outdoor area at Heston Primary School. 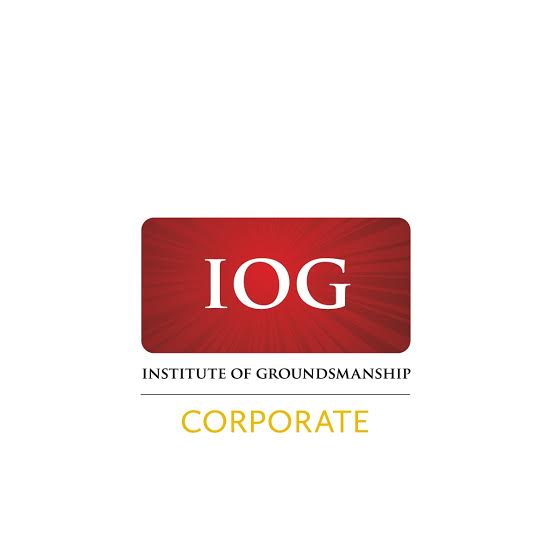 PGSD’s General Manager Alan Wright commented: “We are delighted to have been accepted by the IOG and our team looks forward to continuing our professional development via their world class learning programmes.” 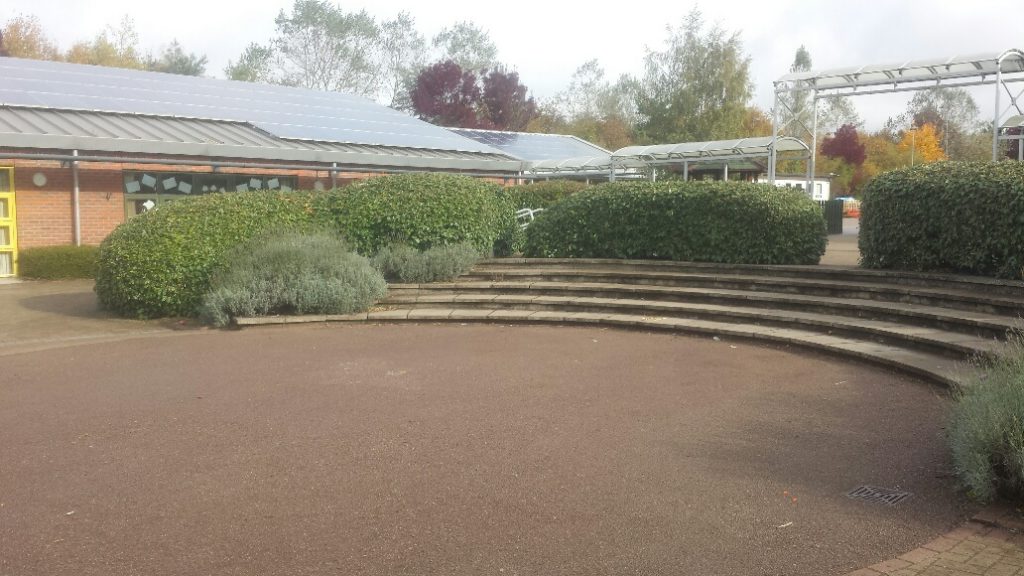 PGSD Limited was asked to work on a project for Church Langley Community Primary School, in Harlow, Essex.

PGSD was asked to reduce the shrubs back to curb edges, clear from lights and reduce in height.

In addition, we were asked to cut back and clear overgrowing branches and vegetation coming through a high fence by the astro pitches.  We cut them back to a height of 8 foot.

We then removed all waste from the site.

All in a days’ work for PGSD. 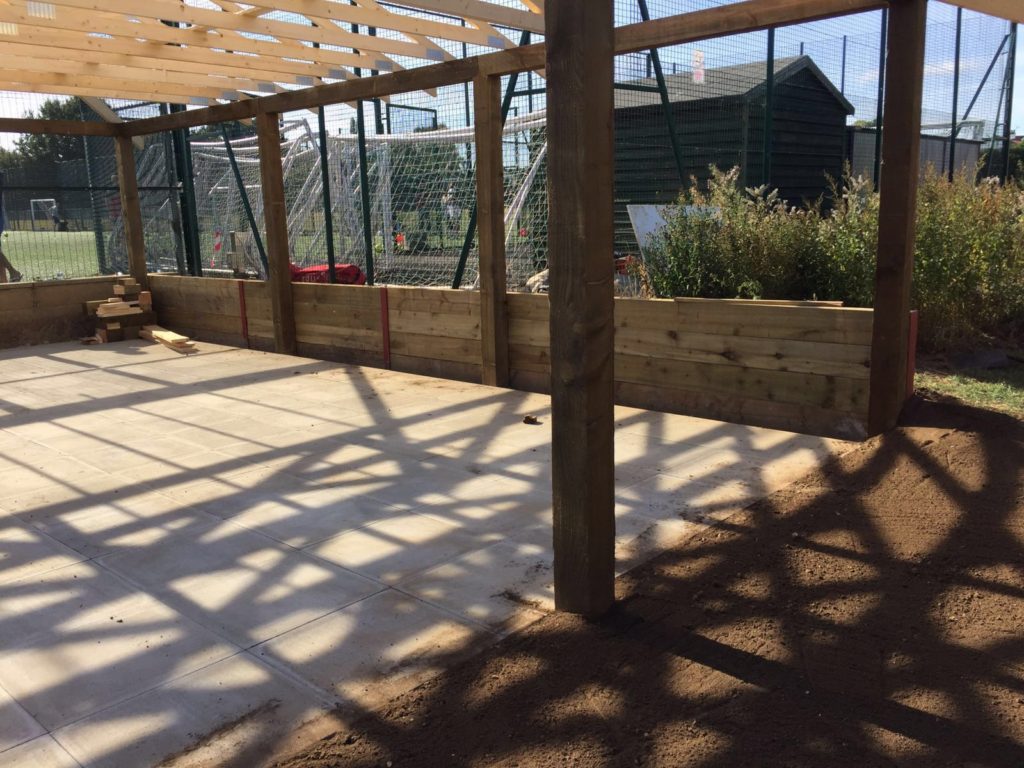 PGSD Limited was asked to pave an area of 110 square metres, matching the top of edging stones. We excavated the entire area to a depth 200mm.

We supplied and spread 100mm of type one crushed concrete, which was then compacted. PGSD supplied and laid 600mm x 600mm pressed concrete paving slabs on a bed of sharp sand and cement and brush pointed with kiln dried sand.

We then removed two edgings and slope paving to firm ramp, as well as supplying and erecting a new railway sleeper wall from 200mm x 100mm x 2.4m pressure treated soft wood. This was supported by 6 x universal beams set 600mm in concrete.

The remaining area of 56 square metres was levelled to 50mm of saved soil. Finally, we raked the area level and sowed grass seed. To finish the job, we removed all spoil from site and left it tidy on completion. 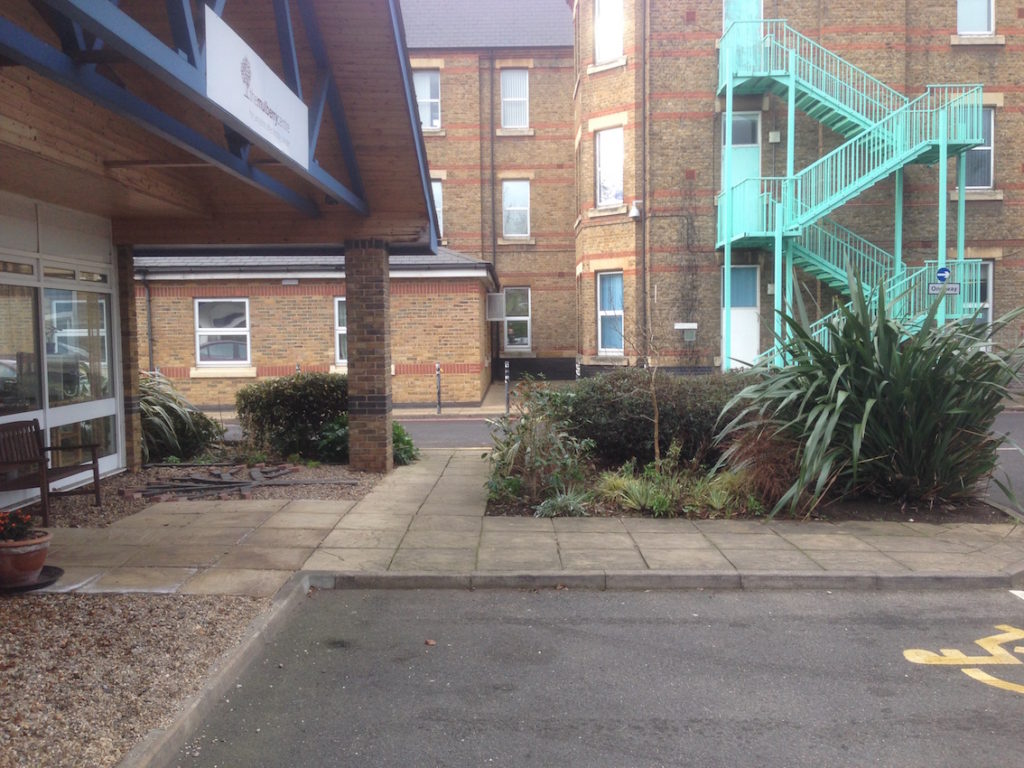 Located in Isleworth, The Mulberry Centre is a charity delivering a range of information and support services to all those affected by a diagnosis of cancer. Their services include complementary and relaxation therapies, ongoing one to one support on a drop-in basis, counselling sessions and support groups, plus a wide range of workshops. This combination of information, support, self-management and relaxation is designed to help people feel in control; it helps them to make the right decisions to manage both the physical and mental trauma of a cancer diagnosis, treatment and recovery.

An integral part of the Mulberry Centre is the relaxing, calm and peaceful atmosphere both inside the building and in the grounds. As the Centre is based in the grounds of the West Middlesex Hospital, it is a real bonus to find some peaceful outdoor space. PGSD and our staff have been maintaining the grounds since late 2015. We have donated our time, expertise and equipment to improving the external grounds in a way that is harmonious with the calm atmosphere of the location. Led by our senior supervisor Matt Farmer, our teams have been involved in a winter clean up, routine maintenance and replanting as well as donating shrubs to the plant sale from our Hatch Furlong Nursery.

Emma Cartwright, the Chief Executive of The Mulberry Centre said: “We are delighted with the work that the team from PGSD has done to ensure our gardens always look their best. They go that extra mile to keep the gardens in tip-top shape and any request for a pruned plant here, or added colour there is always willingly and swiftly responded to. This ensures that our gardens always look cared for and welcoming – a reflection of the ethos of the Centre! It is a joy to work with Matt and his team. Thank you.”

Matt Farmer added: “I am delighted to be able to help out with such a worthwhile cause and make a difference to people’s enjoyment of the grounds.” 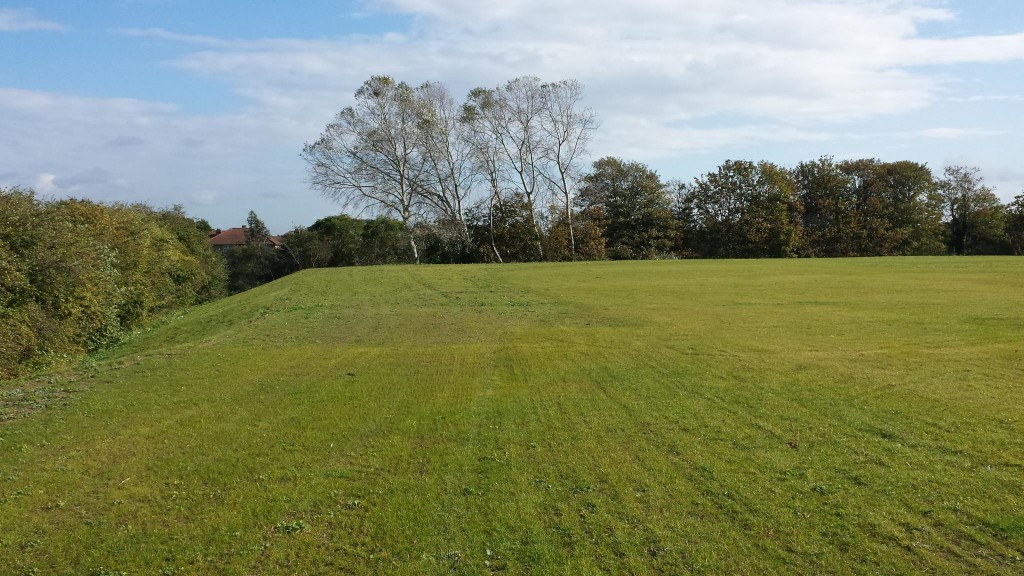 Feltham Arenas was a former sports ground and football club, where Mo Farrah made his first steps to Olympic glory. The site had fallen into disrepair and an existing football stadium and associated buildings had been demolished and then covered over with tipped material. The site was then used as a fly tipping location for several years. The surface of the four hectare site was littered with broken glass, builders rubble, concrete and reinforcing bar.

The site had been reviewed by consultants who had identified an area of Japanese Knotweed. The banks around the area were potentially unstable at their existing gradient. They recommended that the banks around the site were re-profiled to a 1 in 3 gradient.

Originally, PGSD was asked to import topsoil to 150mm deep. However, we suggested that we would screen the existing soil on site and ameliorate it for reuse. This was done using two large trommell screeners. This resulted in a reduction in both price and vehicle movements.

The existing surface of the area and banks was cleared of vegetation, including the Japanese Knotweed.

The surface material and the excavations on the bank were then processed in the screeners. The rubble from the screening was buried in lines to improve the drainage on the site. The soil was then spread over the site, ready for seeding.

Two types of seed were used: amenity grass seed for the impromptu football pitches and a heathland wild grass mix for the remaining areas. The amenity areas were fertilized, as an analysis of the soil showed that it was nutrient poor.

*  Site set up including 92 Heras panels.
*  Welfare facilities including site office and 24 hour security.
*  Bank and slope re-profiling. All spoil removed from slopes and evenly distributed over the remainder of the site.
*  Grading and leveling of the surface. Finished level included a centre camber, to aid water run off.
*  Cultivation and removal of deleterious materials i.e. stone burying – ensuring all stones over 40mm were buried and not visible on the surface.
*  Supply and sow 5500sq.m grass seed BSH RE11 perennial wild flower mix at 2 – 5 grams per square metre.
*  Treatment of Japanese Knotweed. Treatment with translocated herbicide, stem injection, excavation and wrapping.
*  Asbestos monitoring and removal.
*  Site maintained for a period of 12 months from project completion, with grass being mown to amenity standard.

The site has been returned to public use and local residents are able to use the area. PGSD achieved a reduction in price and vehicle movements through screening and amelioration of the top soil.

COVID-19 - update
We are following all legislation and advice from the Government and ACAS regarding COVID-19. We are continuing to support clients with essential grounds maintenance to ensure the sites are maintained to the best standards. We are taking all the necessary steps to ensure we protect the health of our staff, clients and members of the public at this current time.
X

Find out more or adjust your settings.

This website uses cookies so that we can provide you with the best user experience possible. Cookie information is stored in your browser and performs functions such as recognising you when you return to our website and helping our team to understand which sections of the website you find most interesting and useful.

Strictly Necessary Cookie should be enabled at all times so that we can save your preferences for cookie settings.

If you disable this cookie, we will not be able to save your preferences. This means that every time you visit this website you will need to enable or disable cookies again.